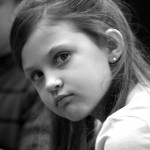 “Elle needs to be on the stage!” That’s what her preschool teacher said — and every teacher after that. Elle got her chance when she signed up for competitive dance at the age of 6 and found she loved performing. This led to a role in The Lion, the Witch and the Wardrobe at her Michigan hometown community theatre. Seeing Elle’s joy at being able to act, her mother Kristina was convinced of her daughter’s passion and signed Elle up for acting lessons. One year later, she was discovered by talent manager Susie Mains, who convinced the family to let Elle come to Hollywood, where she immediately signed with an agent and has not stopped working since. With 5 feature films, numerous commercials and print ads under her belt – as well as guest appearances on such shows as The Middle – Elle is now a veteran of show business at just 11 years old!

She idolizes Sofia Coppola, and wants to write and direct as well as act. In between all of this, Elle still finds time to hang out with her friends and two younger sisters, go shopping, go to the movies and play the guitar.