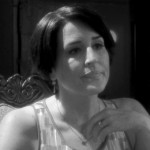 Meeghan Holaway is a recurring character on ABC Family’s Switched At Birth.  She’s appeared on Everybody Loves Raymond, Law & Order, Cold Case, Without A Trace, Law & Order, Desperate Housewives, Two and a Half Men and Private Practice, among others.  She’s had recurring roles on Lifetime’s Inspector Mom and Showtime’s The Hoop Life, as well as The Bold and the Beautiful.  She appeared in Frank Miller’s The Spirit and Tim Allen’s Crazy On The Outside.

She has also performed leading roles in over sixty plays in theatres across the country;  some of her favorite theatre roles include:  Beth in the original Off-Broadway production of Dinner with Friends, Sylvia in Sylvia, Brooke in Noises Off, Diana in Lend Me a Tenor, Myra in Hay Fever and Sarah in Company.  Most recently, Meeghan created the lead role of Florence Greenberg in Baby It’s You at the Pasadena Playhouse.